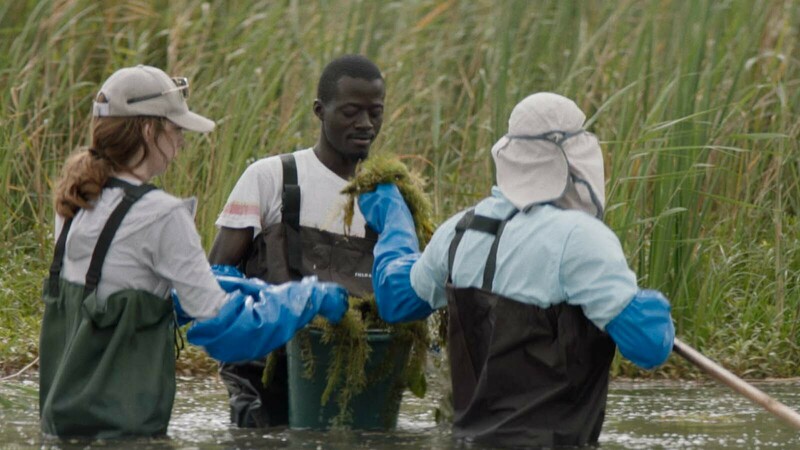 Eradicating schistosomiasis is a complex problem that requires a complex solution

Wading in ankle-deep water, Senegalese women and children wash clothes in small basins. They laugh and chatter as they work. All around them, the water is covered with weeds. In those weeds live hordes of snails. Those snails host parasitic flatworms. And those flatworms repeatedly infect the villagers, causing schistosomiasis, a disease that results in distended stomachs, damaged organs, bloody urine, cancer and, in some cases, death.

Second only to malaria as the most devastating parasitic disease in the world, schistosomiasis annually infects 200 million people and claims 200,000 lives. Another 800 million people are at risk, predominantly across Africa, eastern Latin America and southeast Asia. While there are existing cures, reinfection rates are very high, says Jason Rohr, the Ludmilla F., Stephen J. and Robert T. Galla College Professor of Biological Sciences and chair of the biology department.

“After humans are treated, when they return to water bodies with snails, they simply get reinfected,” he explains. “When we return to villages in Africa a year after we’ve treated children in those villages, we will often see the proportion of children that are reinfected up near 70 to 90 percent because many of those kids go back into the water bodies. What we really need are some control measures that address the cause of the infection, which is the snail. That’s the source of the worm that causes the disease.”

Rohr works in more than 20 Senegalese villages alongside local partners such as Espoir Pour La Santé (EPLS) and Station d’Innovation Aquacole to address issues related to schistosomiasis. While EPLS, a nonprofit, does all the medical testing, drug administration and health interventions, Rohr is digging into how to eliminate infection in the first place.

“People in the underdeveloped world face numerous problems from health issues to water, food access and energy access. What we need to do is find solutions to all of these problems to improve their livelihood.”

To eradicate infections, the parasites need to be eliminated. To destroy the parasites, Rohr knew he had to shrink the number of snails. To reduce the snail population, Rohr suggested removing its habitat — the aquatic vegetation where it lives. In some places, the weed growth had been spurred by fertilizer runoff from nearby farms, so it was densely clogging waterways.

Once the weeds were removed, rates of infection dropped almost immediately, Rohr says. But weeds regrow, so he needed to propose a long-term solution, one he hoped would be comprehensive enough to solve challenges beyond just schistosomiasis.

“People in the underdeveloped world face numerous problems from health issues to water, food access and energy access. What we need to do is find solutions to all of these problems to improve their livelihood,” he says. “Our intervention, we believe, can address multiple problems simultaneously and in a manner that will be cost-effective and adopted by people in the developing world.”

To incentivize the villagers to routinely remove the weeds, Rohr’s team is testing the best way to make those weeds a sought-after commodity. So far, the plants have proven to be useful feed for livestock like sheep, cattle and donkeys. They have also been fruitful compost for farms, yielding higher crop production, which increases food availability. Rohr’s team is also assessing the viability of using weeds in biodigesters to create gas for generators or cooking. While some of these conversions can be expensive, he has partnered with economists at Cornell University to assess the long-term cost effectiveness of each of these options.

“It turns out that the benefits outweigh the costs, so we believe that [compost] is a cost-effective or viable option for use of the vegetation. We’re still exploring the cost-effectiveness of the livestock feed. And the biodigesters are quite expensive upfront, but they may end up paying off and being more cost-effective in the long run,” he assesses.

Ultimately, Rohr explains, they want to ensure that the intervention can be, and will be, sustained. He has plans to test other economic models like education about the project, government involvement, mechanical equipment and more.

Meanwhile, one of Rohr’s graduate students, Meghan Forstchen, has added a drone to the project. Forstchen is able to use the drone to assess larger swaths of their test area and easily pinpoint and tackle problem areas where the weeds and schistosomiasis are abundant.

“I think that the ability to use drones to capture images facilitates being able to look at things at a much larger scale as opposed to doing more traditional sampling of just going into water access points. So, we have a larger picture of what’s happening,” Forstchen says.

Rohr also mentions that they have preliminary data that they may be able to get an even broader picture by using satellite imagery to identify vegetation, and thus schistosomiasis hotspots, across Western Africa, or even the whole continent. That could allow the group to easily identify where to move their project next and ultimately provide early intervention, expedited drug treatments and hopefully eradication.

Forstchen says, “I think it’s really interesting that we’re not just the cutting edge, but almost the bleeding edge of a lot of the research.”

Rohr’s multi-prong approach is novel and was recognized as a finalist for the MacArthur 100 & Change grant in 2020 and the MIT Solve Competition in 2021. Still, he says there’s more work to be done.

“The fact that we believe that we are improving the lives of some of the most underprivileged people in the world is definitely motivation,” he says. “We are confident that these interventions benefit the people in Senegal. But what we really need to demonstrate is that the interventions are maintained when we leave the country. If we identify a solution that’s not adopted by the people, it really does no good. And so the next steps in our work is to educate the villagers regarding our findings and evaluate their willingness to implement those interventions in our absence, as well as spread the word to other villages, so that the benefits can be incurred by a wider group of people.”