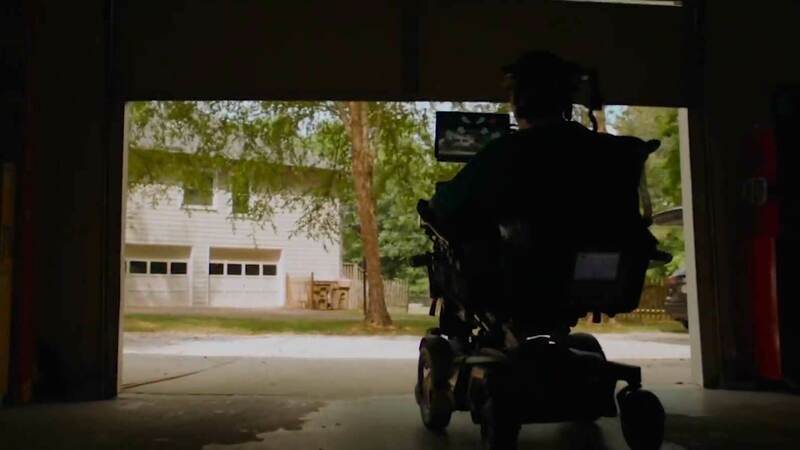 Inspired by his dad’s ALS diagnosis, an undergraduate works to better equip other powerchair users

Please excuse any typos, I am typing with my eyes.

My name is Shawn Sexton. I am 55 years old and a 1988 graduate of Notre Dame. My wife, Kathy ’91M.A., and I have been married for 28 years and we have a 20-year-old son, John, who is a junior at the University of Notre Dame. I was diagnosed with bulbar onset sporadic ALS in September 2014.

In the summer of 2013 I had a very active family life, a rewarding career as a network engineer and technical leader at Cisco Systems, I coached youth sports and enjoyed photography, videography and boating on Lake Blue Ridge.

In September 2013 I started to have problems with my speech. It felt like my tongue was getting hung up on my teeth. In late January 2014 I spent a week in bed with pneumonia. I had trouble walking on my right leg. In April I fell and faceplanted into a concrete sidewalk coming out of church. I fell several more times over the next few months but learned to land without injury. In the summer I began having trouble with my right shoulder and hand.

At the end of July 2014 my doctor acknowledged there was something wrong with me, possibly a stroke, and he ordered a brain MRI and referred me to a neurologist. An EMG test revealed pervasive nerve damage. After ruling out everything else, on September 16, 2014, I received the ALS diagnosis.

After seven years of relentless ALS progression I can no longer walk. I use a powerchair to get around. I cannot use my arms or hands, and I have very little movement in my legs. I cannot speak and I rely on an eye gaze system to communicate. I require assistance with all activities of daily living. Kathy dresses me, bathes me, brushes my teeth, helps me with toileting, moves me around, scratches my itches, and pretty much helps with anything I need to do. It is an incredible burden on her and she does it faithfully and without complaint.

As you can tell I rely entirely on other people and technology. When I need technology that does not exist John and I create it. Our latest project was a hardware device and application that allows me to drive my powerchair and adjust my seating with my eyes using my eye gaze system. We call it EyeDrive.

LifeDrive began as EyeDriving, a stack of three computer chips connected to a series of apps that allowed Shawn to drive his powerchair with existing eye gaze technology. The initial prototype was simple and gave Shawn some independence. But Shawn and John are both curious and driven, so they tinkered. They programmed the ability to shift the chair’s position to reduce risk of pressure sores and alleviate pain. They added the ability to toggle between the communicator app and the driving app so Shawn could do both. With input from Kathy, they added a caregiver app with safety features and the ability to drive remotely. Then father and son added the ability to change speed and turn the chair off, along with other options to allow Shawn more independence.

“We had to think of all of the different features that we needed to include in our solution that would make sure he stayed as independent as possible and his quality of life would be as good as possible,” John explains. “A lot of assistive technology out there … doesn’t take into account the full needs of a patient in a power wheelchair, but ours does because it’s designed by a patient.”

Anything they didn’t know how to do, they taught themselves — from coding to soldering. Then John got to Notre Dame and even more doors opened.

John is now a junior electrical engineering student. As he recalls, it was during a meeting with Kerry Meyers, a mechanical engineering professor and the Ahearn Family Director of the ND Engineering Grand Challenges Scholars Program, that it became clear Notre Dame had resources to launch LifeDrive beyond his family home.

The Grand Challenges Scholars Program offers admitted students an opportunity to work alongside a faculty mentor and focus on research and solutions for a challenge considered one of the world’s greatest.

“Grand Challenges has provided us a blueprint for how we can best utilize the Notre Dame network and community to make this product a reality,” John explains.

John was paired with Robert Stevenson, a professor of electrical engineering, who is helping him create a printed circuit board to streamline the hardware and make it easier to manufacture. John also connected with the team at the IDEA Center, which has helped with the business side of the project from filing patents to navigating FDA regulations to creating an LLC. He then put together his own team to join him as the venture, now called LifeDrive, expands.

Last semester, the LifeDrive team, then known as EyeDriving, did a six-week pre-accelerator program through the IDEA Center that pushed them to do patient and caregiver interviews to improve the prototype. The team also made it to the McCloskey New Venture Competition and won enough funding to cover their provisional patents. John and members of his team then spent the summer with Race to Revenue, a summer startup accelerator through the IDEA Center. He’s set an aggressive two-year deadline to get LifeDrive to market, but as always, John has the patients first in his mind.

“To try and get this to patients by the time that we graduate is daunting and challenging, but it pales in comparison to the needs of those patients that we’re trying to serve,” he says. He explains that getting LifeDrive to patients is so important because not only does it give them technology and independence, but it gives them hope. That hope, he says, can be life-giving.

He points out that many factors that can determine how long someone lives with this disease, like quick progression of symptoms, respiratory complications and loss of mobility. But after having conversations with ALS patients and caregivers, he found that how long someone lives with ALS is deeply influenced by the prospect of regaining independence and an enriched quality of life. Hope influences the will to keep fighting to move. Restored freedom encourages them to keep fighting to live.

“LifeDrive really has given [my dad] a lot of will to keep fighting. ALS patients normally live for two to five years … and my dad’s on year seven right now, and with no end in sight,” John says. “Seeing the effect of independence and mobility and quality of life has had for my dad and my family as a whole and seeing that other individuals don’t have that, I feel a sense of responsibility to do everything I can to provide that to … other families and groups of people who really need it, because everybody should have the best quality of life possible.”

In the future, once LifeDrive has buy-in from the ALS community, John says the next step is to expand to patients with cerebral palsy, multiple sclerosis, muscular dystrophy, stroke or spinal cord injury and anyone else who would benefit from the technology and the hope it provides.

That spread of hope, of independence, of dignity, is his dad’s greatest legacy, John says.