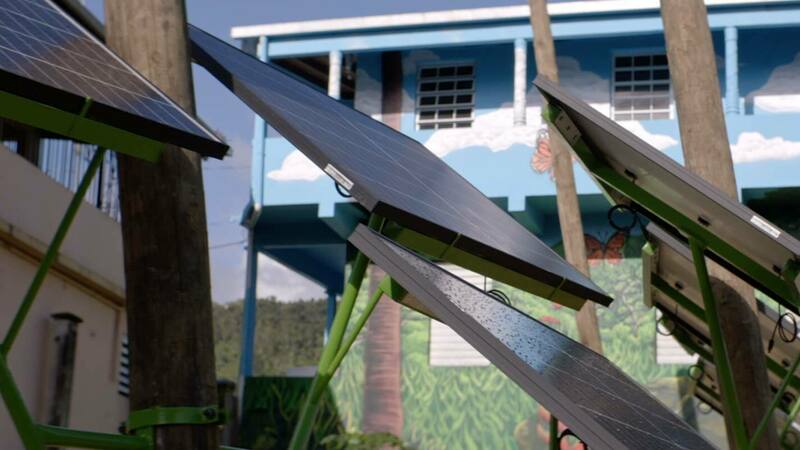 Lucas Barreto remembers when the eye of Hurricane Maria passed over his home in Puerto Rico in 2017. During the moments of reprieve from 155-mile-per-hour winds and pelting rain, he ran outside to empty the gutters, hoping to spare his home even more flooding. He tied down the trees with ropes and used extension cords to secure the doors. He and his father wedged towels and T-shirts beneath the door jambs to stem the tide of water from the house, but to no avail. A river ran through the home as the family hurried to lift and save what they could.

Once the storm passed, the real trouble began.

The island of Puerto Rico had suffered another hurricane, Irma, a Category 5 storm, just weeks before Category 4 Maria. What hadn’t been destroyed by Irma skirting the coast came under direct fire from Maria. Winds, rain and floods decimated homes, buildings, roads and Puerto Rico’s delicate infrastructure system. Power and running water were halted. Phones were dead. Roads were unnavigable. Barreto recalls waking up early to wait in hours-long lines for water and gasoline for generators. This went on for days, weeks and months.

“This catastrophe definitely confirmed what I wanted to study, which is renewable energy, in order to create independence from the grid here in Puerto Rico.” —Lucas Barreto

“We had no running water for about three months, no electricity for six months,” he sums in his head.

Still, Barreto and his family count themselves lucky. They were safe, while the storm and its aftermath took the lives of thousands of their neighbors. Their home sustained only minor damage, so they were able to serve as a refuge for friends and family who were less fortunate. Some homes, even today, five years after the hurricanes, are still covered by the blue tarps handed out by the government in 2017. Energy is still unstable on the island, and power outages are regular.

“This catastrophe definitely confirmed what I wanted to study, which is renewable energy, in order to create independence from the grid here in Puerto Rico,” Barreto says.

In 2020, Barreto made his way to Notre Dame to study mechanical engineering. He discovered ND Energy, a center within Notre Dame Research dedicated to sustainable energy and which offers a minor in energy studies.

Last spring, Barreto took a seminar with ND Energy and the College of Engineering titled “Puerto Rico: Road Map to a Renewable Future,” alongside 11 other undergraduates from a variety of disciplines – from engineering to sociology to economics to architecture. The instructors, Ginger Sigmon and Anne Berges Pillai, asked the students to holistically consider the challenges and benefits of sustainable energy in Puerto Rico and beyond.

“There is no magic wand, no single technical solution for the energy conundrum,” says Pillai. “As future leaders, we want our students to lead with their hearts as well as with their minds. Being in the homes of those without power, electrical or financial, exemplifies the need for energy justice better than any book or lecture.”

To help provide context to some of those uniquely Puerto Rican challenges, Pillai invited Yamil Colón, a Puerto Rico native and an assistant professor of chemical and biomolecular engineering, to teach portions of the course.

“My role really is to provide students with a broader sort of cultural, historical background,” Colón explains. “It’s like, ‘Look, these are the opinions on the island, this is what you might encounter, this is why some of these things can be a little bit difficult to sort of wrap our heads around because of the history and the relationship between the U.S. and Puerto Rico, the local politics, the bankruptcy.’ There’s a lot of moving pieces and so I try to give the students that background.”

Colón recalls the days around Hurricanes Irma and Maria as the most difficult of his life. While he was safely in the United States, both his family and his wife’s family were in Puerto Rico. For days, they heard no word from them as they watched videos of the catastrophe unfolding on the news. Finally, Colón’s parents were able to find enough cell service to place a 30-second phone call to confirm they were OK. They too went five months without power. No refrigerator. No running water.

So while Colón offers pertinent cultural, historical, geographical and political context, along with his expertise in molecular modeling and energy storage, he also brings genuine concern and hope.

Part of that hope stems from the impressive work of community organizations like Casa Pueblo, a nonprofit environmental justice organization in mountainous Adjuntas, Puerto Rico. For decades Casa Pueblo has led a grassroots push toward sustainable energy and has successfully rallied community support. The group started experimenting with solar energy in 1999 and became completely energy independent in 2017, just months before the hurricanes. In the wake of the destruction, while the rest of Adjuntas remained dark for almost a year, Casa Pueblo was able to serve as an energy oasis and help community members in need, says Arturo Massol-Deyá, the executive director of Casa Pueblo.

“What we're promoting is a transformation of our energy landscape. Energy security for everyone.” —Arturo Massol-Deyá

"We were able to reopen our doors the day after the hurricane, and we immediately became an energy oasis for the community. People were coming in and out to plug in their equipment, their respiratory machines," says Massol-Deyá. "We decided to upgrade our energy response to get involved directly at homes to secure their medical equipment, to power a dialysis equipment, respiratory machines and fridges for insulin and medicines. Over 100 homes are now running like Casa Pueblo."

Their use of solar energy, along with their educational and advocacy efforts, has been a powerful testimony that has helped garner community support. Partnering with businesses, communities, academia and volunteers, the group has installed solar energy systems for homes, critical infrastructure, and businesses there so they are no longer reliant on traditional, fragile infrastructure. Together, they aim to become the first solar town in the world.

“What we're promoting is a transformation of our energy landscape. Energy security for everyone,” Massol-Deyá says. “This is about climate adaptation, and this is why we're so proud and happy to…build this relationship with ND energy.

This March, Casa Pueblo and the Notre Dame students, along with the Let’s Share the Sun Foundation, co-founded by Bill Jordan ’85, and a team from Wood Mackenzie, a Verisk Business, led by Luke Lewandowski ’00, joined together to install 60 solar panels on 10 homes for local families with medical needs dependent on energy.

A sobering reality Barreto and the students quickly discovered is that in the absence of power, people’s lives are at stake. On the ground, he and his classmates helped one of those vulnerable individuals by spearheading a solar energy solution on his home, making it resilient to power outages.

“The house we worked on is actually a house where there’s a family member who’s bedridden, and he needs constant electricity to keep him alive. And I spoke with the family members and their electricity went out two or three times a week, sometimes an hour each time,” he says. “Each time that happened, one of the family members had to run, get a power generator from the neighbor and come back.

“They were stressed. They couldn’t live in peace,” he says.

While Barreto had formerly interned with a solar panel company, this was his first time installing a system. The face-to-face contact with recipients left an impression. This summer, Barreto interned with Let’s Share the Sun and its parent company, Jordan Energy and Food Enterprises. There he was responsible for collaborating with Casa Pueblo on a new project: converting a community of nearly 30 homes to 100 percent solar energy. He also worked with local entities to raise funds to install solar panels on a domestic abuse shelter.

“When considering the renewable energy field, every little step counts. Even if it’s installing one house, it might be just one house, that’s not that much energy. But then the neighbor notices that house, and then he says, ‘Oh, you’re not paying for energy? You have electricity, while I’m out here, not connected to the grid, and the power goes out twice, three times a week?’ And the word keeps moving around.”

While Puerto Rico provides a compelling example of energy issues, Colón insists the problem spans far beyond the island. It is, in his opinion, “the biggest threat to humanity.” From climate change to water scarcity to pollution to sustainable energy, it’s all interconnected, he says. And that’s something he hopes the students learn from this course. By reckoning not only with the science and engineering of solar energy, but also the economics, the politics and the community involvement, he hopes the students are better equipped to tackle issues of this complexity and magnitude in the future.

“Our goal as professors here is to produce students who are well versed in all of these aspects, to come up with solutions and understand, then, what would it take to have something that is robust that works for the community,” he says. “[This] is very much within the Catholic identity of Notre Dame both in the aspect of going there and helping communities, but also the education that we’re giving the students. By giving this community-based learning that they can take with them as part of their identity and how we shape the future professions.”