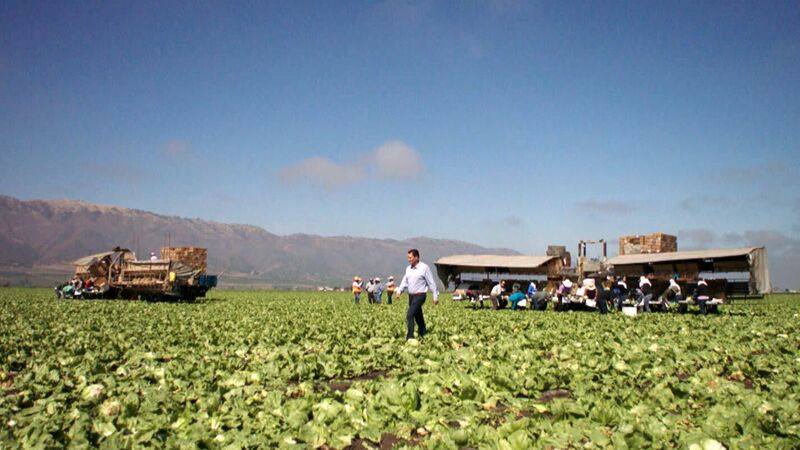 J.P. LaBrucherie stands looking out over his fields — 7,000 acres of kale, chard, arugula, carrots, onions and celery. The fields have been in his family for generations, but the future is uncertain.

“California is about to run out of water,” he says plainly. “We’re going to have to basically stop farming part of our farm.”

California and many of its neighbors rely on the Colorado River to route water to 40 million people. Each year, 4.4 million acre-feet of water are sent to Californians, but this year, in the midst of extreme drought and years of overuse, all Colorado water users were asked to cut 2-4 million acre-feet. With that little water, farmers can’t farm the same amount of land, the 2002 Notre Dame law graduate says. With less farming, there will be less food. Less food means the available food becomes more expensive. And suddenly, even those far from the West Coast are feeling the effects of the drought.

By 2025 it is predicted that two-thirds of the global population will be impacted by water scarcity. The impact will touch everything from farming to manufacturing, from health care to residential water access. Without clean water, humanity is at risk.

Tengfei Luo, the Dorini Family Professor for Energy Studies in the College of Engineering, has been staring at this crisis since graduate school. During his days as a postdoc at MIT, Luo participated in a research project that created directional solvent extraction (DSE), a new way to desalinate water. But upon his arrival at Notre Dame in 2012, he believed he could engineer better materials to create a more efficient system. Then, he met Brandon Ashfeld.

Professor Ashfeld is an organic chemist in the Department of Chemistry and Biochemistry who specializes in small molecule design and synthesis. For years he has designed and studied ionic liquids, which were found to more efficiently desalinate water. Together, in an interdisciplinary project between the Colleges of Science and Engineering, Ashfeld and Luo were able to design a system that purifies water using far less energy, about a tenfold reduction, and costs much less than original DSE methods.

Luo says, “The only place, actually, you can grow your fresh water supply is from seawater, so that’s why desalination is very important. However, current technologies are energy intensive and capital intensive.” He explains that there are two typical methods of desalination. The first, thermal desalination, used extensively in the Middle East, requires boiling water, which requires high-temperature thermal energy, typically from fossil fuels, leading to additional environmental issues. The second option is reverse osmosis, also called membrane desalination. It relies on electricity and high-pressure pumps to push salty water through expensive membranes, leaving clean water on one side and salty brine on the other.

The technology enabled by Luo and Ashfeld’s research requires none of that. In their process, liquids need only reach 45 degrees Celsius (113 degrees Fahrenheit), far below boiling, which can be achieved from simple solar heating or even waste heat from industrial systems like power plants. It also requires no membranes, just Ashfeld’s ionic liquids — which, he notes, are generally inexpensive to create.

The other issue posed by typical desalination is the salty brine that results from these interventions. On average, ocean water is about 3.5 percent salinity. Traditional methods can pull fresh water until the original solution hits about 6 percent, at which point, it’s often tossed back into the ocean, with the hope of gradual dilution. But increasing the salinity of the ocean is unsustainable as it causes strain in existing ecosystems, kills marine life and destroys aquatic plants.

Luo and Ashfeld have tackled that, too. Their method can approach a zero liquid discharge, meaning they can pull all liquid, leaving only crystallized salt, which can then be recovered and reused. It can also be used to remove other highly toxic salts, such as arsenic, from contaminated water sources. The applications, Ashfeld notes, are vast.

“We envision our ionic-liquid-driven, directional solvent extraction system to be used in cleaning industrial wastewater streams so as not to contaminate soil and/or existing water sources,” Ashfeld says. “Given the emphasis on clean water in our homes, the importance of which is hard to understate in light of recent high-profile incidences of residential water contamination, we anticipate small-scale systems being installed in homes for removing toxic salt contaminants before reaching the tap.”

The duo is now working to form a startup company with the aim of getting this technology first to market, then to homes.

In academia, the push for interdisciplinary research is not new, but doing it effectively poses a lot of challenges, says Bob Bernhard, the vice president for research. To work together, it’s important that academics from different disciplines learn to speak to one another and set goals so everyone can grow and accomplish. Because of those challenges, Bernhard notes, the pace for cross-disciplinary research is sometimes slower, but oftentimes, in the end, radical.

“This is how you end up with the solutions that the engineers would never have found, and you end up with applications that the scientists would never have imagined,” Bernhard says. “Sometimes the engineer goes, ‘Oh, I didn’t know that was doable,’ and the scientist goes, ‘I didn’t know that was important.’ You get that kind of a-ha moment on both sides.

“That's the kind of magic that happens."

Ashfeld agrees. He says, “I think that’s a big selling point here [at Notre Dame] is that there are a lot of people who collaborate, a lot of collaborative research projects, but what’s important to note is that cross-college collaborations, like ours, are important for addressing global challenges.”

Back in California, LaBrucherie notes this isn’t California’s first drought. He recalls scares in the past, like when his father was at the helm of the farm in 1998, but like then, eventually a big snow would refill the dams and rivers. This time, he’s less optimistic that he can rely on precipitation and is instead looking for change, perhaps like what Luo and Ashfeld can provide.

“The research being done at Notre Dame could be transformative for me and other farmers, and really benefit the generations to come as well,” he says.