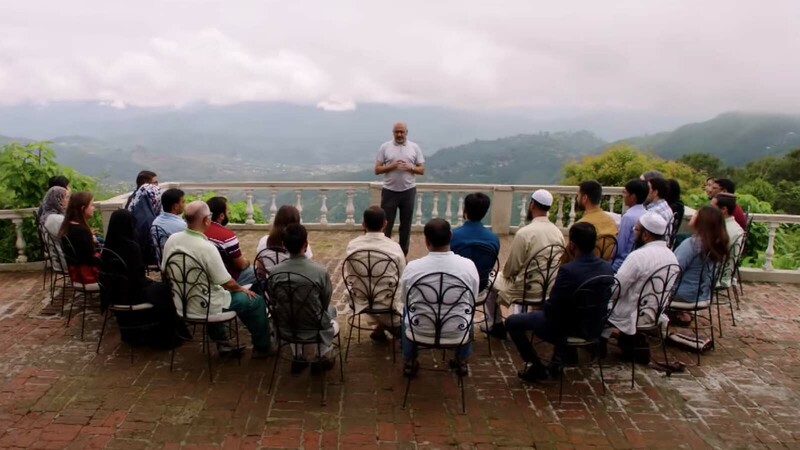 On a large patio overlooking verdant hills outside Kathmandu, Nepal, Professor Ebrahim Moosa sits surrounded by an unlikely group. Before him are Muslim scholars from both Pakistan and India — typically unfriendly nations — mixed with a small contingent of female, largely Christian Notre Dame undergraduates.

They’ve all gathered here, in a religious and politically neutral location. They are part of Moosa’s Madrasa Discourses project, a revolutionary concept that brings together scholars from traditional Islamic schools known as madrasas to enhance and improve the curricula taught at these institutions. Because madrasas were, for many centuries, attached to mosques, these Muslim seminaries historically teach classical religious texts and concepts while omitting subjects like history, politics, economics, modern science or alternate ways to imagine theology, fearing it may conflict with orthodox teachings. Moosa explains that in ignoring these modern subjects, Islamic thought is disconnected from the social realities of contemporary Muslim life. Madrasa graduates would be better equipped if they had the skills and knowledge to address the modern, multifaith and multicultural world where they live and teach. This desire to fill the gap between traditional teachings and the modern world has drawn hundreds of students from across the world to inquire about Moosa’s program.

“What we have done, to some extent, is started the conversation. But the debate has been happening on the Indian subcontinent and elsewhere for over 100 years that we need a theological curriculum for the changed world in which Muslims live,” says Moosa, a professor of Islamic studies in the Keough School of Global Affairs and the Department of History. “We’ve managed to get a group of people together who are not only talking about curriculum change but are implementing changes in their lived practice. This program empowers them how to think in a different way and bring about change on the ground.”

Moosa's Madrasa Discourses project brings together madrasa graduates who yearn to fill the gap between traditional teachings and the modern world.

Moosa himself is a devout Muslim and a graduate of one of India’s leading madrasas. But despite his traditional education, his moderate views made him the target of an extremist terrorist attack in his hometown of Cape Town, South Africa. He has experienced firsthand how misinterpretations of classic texts can cause harm, and it has motivated his academic and professional endeavors.

Moosa explains that in the mid-1990s as apartheid fell in his home country, groups grabbed for power. One such vigilante group, People Against Gangsterism and Drugs (PAGAD) promised to protect the people and advocate for peace and stability, but instead they formed gangs who detonated bombs and killed to violently make their voices heard. PAGAD gradually became associated with terrorism and rebuked those who advocated for a more moderate stance. After one of Moosa’s friends was killed in one of these attacks, Moosa, then a respected academic and former journalist in Cape Town, spoke out against PAGAD and extremist ideologies. In response, his house was bombed with his family inside. He and his family narrowly escaped harm, but the memory is still vivid. “All the windows in the house shattered,” he remembers.

Fearing for his family’s safety, Moosa came to the United States, first to Stanford, then to Duke. Just weeks into his first semester at Duke, he watched in horror as planes were flown into the World Trade Center and the Pentagon on 9/11. He could not believe the acts of terrorism being committed in the name of Islam, nor the sudden prejudice that all Muslims were linked to terrorism. Especially distressing was the inaccurate label that madrasas were breeding grounds for terrorists, he says.

It was then that Moosa felt the seed of an idea. If he could share his experiences with other Muslim leaders, he could instill a greater appreciation for peace and justice within Muslim communities around the world. But it wasn’t until he came to Notre Dame in 2014 that he felt he had the environment where he could pursue a program in religious and theological education with a focus on Islam. 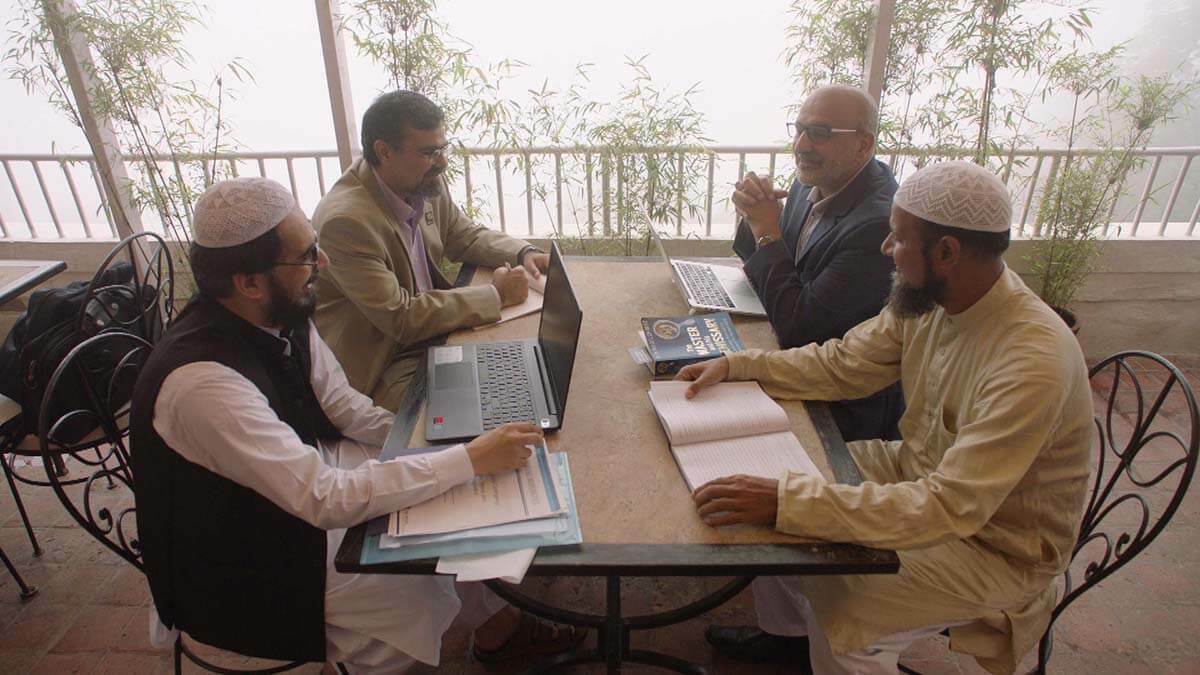 The Madrasa Discourses project is a three-year program, funded by a grant from the Templeton Foundation. It has enrolled 55 recent madrasa graduates who engage with Moosa and other faculty from Notre Dame, Jamia Milia Islamia in New Delhi, India, and GIFT University in Gujranwala, Pakistan. The goal is to deepen their understanding of how subjects including history, science and Islamic theology meet Islam’s ideals of salvation through human flourishing, development and peace. By enlisting madrasa graduates, Moosa hopes to revitalize a dynamic understanding of Islam and its intellectual culture at the grassroots. Madrasa Discourses aims to revitalize an established tradition with the insights of the contemporary world. The scholars in his program, he explains, are at the forefront of ideas and values, and are respected leaders in their communities who can make transformative changes to their societies.

Because the students are from a range of madrasas, cities and countries, much of the learning for Madrasa Discourses is taught online. Three hours of live, online courses are streamed each week, and the groups also convene in-person for a period of three weeks over two meetings each year. At those meetings, select Notre Dame undergraduates, largely peace studies students, are invited to participate in the lessons and discussions.

“One of the things that this Notre Dame program is doing is opening the door for cross-cultural and inter-religious dialogue.”
— Elizabeth Boyle, junior

Elizabeth Boyle, a junior studying peace studies and political science, took a break from her summer internship at USAID to attend the July 2018 meetings in Kathmandu.

“One of the things that this Notre Dame program is doing is opening the door for cross-cultural and inter-religious dialogue. Engaging with traditional Islamic scholars on Islamic text and mixing it with modern, Western, theological and philosophical thought has allowed me to engage even deeper into a study of the differences that bind us together,” she explains.

“Being a part of the Madrasa Discourses program has taught me what an incredible and powerful force religion is to connect people who may seem different on the surface but at the core are all related in their strong devotion to faith. Religion is a tool that binds people, regardless of gender, race, socioeconomic status or boundaries, and can be a powerful tool for inclusion and for promoting and creating a more sustainable, peaceful and tolerant world.”

After graduation, Boyle hopes to pursue a master’s degree in religion and diplomacy to prepare for a future in international affairs.

To date, the Madrasa Discourses project has enrolled more than 80 students around the world and is part of a larger interdisciplinary effort at Notre Dame’s Kroc Institute for International Peace Studies titled Contending Modernities. The project explores the intersections and interactions of religious and secular forces, and seeks to influence public discourse, educational content and policymaking. 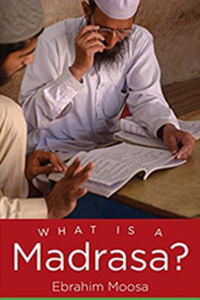 What Is a Madrasa?

Moosa has also written a book titled “What Is a Madrasa?” which details the history, goals, daily routines and traditional curricula within the institutions, and also features a number of leaders with diverse viewpoints. It clarifies and refutes some of the misrepresentations of the schools in the wake of 9/11, but also offers suggestions for how reform, transformation and revitalized tradition can help madrasas deal with the challenges posed by the modern world and make peace more enduring in the world.

Now in its third year, the Madrasa Discourses project will graduate its first class next summer. Moosa hopes to renew the program for an additional five years and welcome participants from sub-Saharan Africa, in addition to South Asia. Plans for a global internet portal with resources available in several languages for Muslim theologians are also underway.

As for the current cadre of students, Moosa says the transformation they have experienced is remarkable. And for him, he adds, “Witnessing how these scholars embrace their faith tradition as the ideal of peace, dignity and deep theological understanding is undoubtedly the most rewarding experience of my life.”