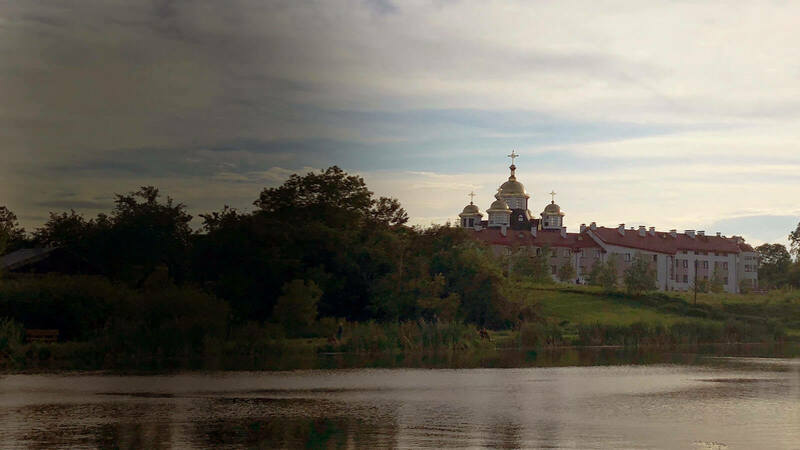 Fighting for Freedom of Thought

In 1991, the Soviet Union collapsed and Ukraine declared itself an independent state. But political independence didn’t rid the country of Soviet or communist influence. Democracy was fragile. Corruption ruled government, business and education. People were killed for speaking out and demanding justice.

But this darkness was not unique to Ukraine. Civilians across the post-Soviet territories lived in the shadow of the nation from which they had escaped. But there was a beacon of hope — Catholic universities. Because of their spirit of independence, these institutions could teach radical ideas like human dignity, freedom of speech, transparency and justice.

These universities were often young, small and under enormous pressure from governments opposed to their very values. Some schools were denied accreditation. Others faced intimidation. Their challenges were great, but so was their potential. They believed they could teach the next generation how to instill ethics and morality into government, business and greater society. They could revolutionize and improve their communities. They just needed support.

A. James McAdams, the William M. Scholl Professor of International Affairs and, at the time, the director of Notre Dame’s Nanovic Institute for European Studies, believed there was good reason to partner with these Catholic universities in post-Soviet territories. 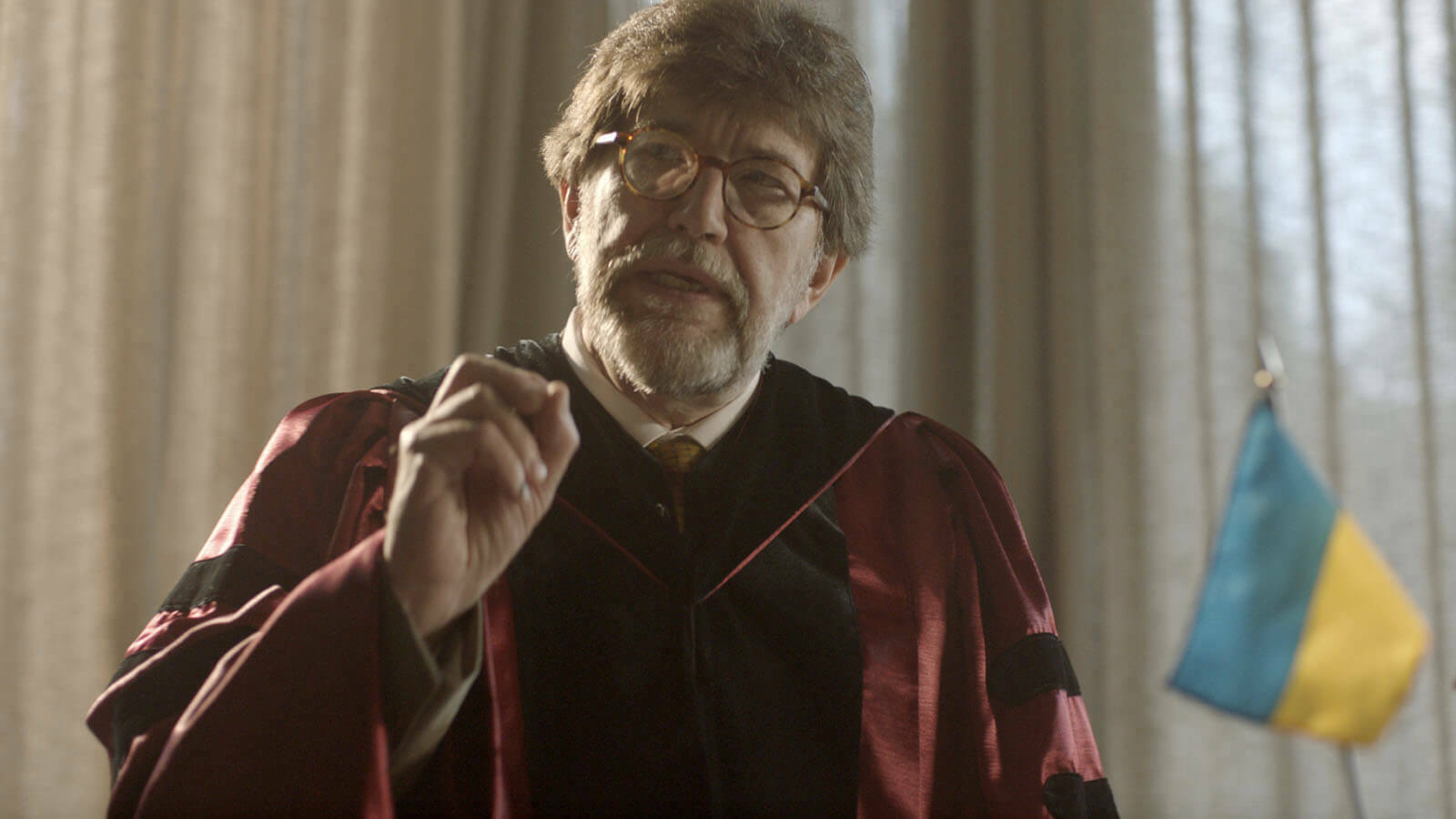 Professor A. James McAdams gives a presentation at the Ukrainian Catholic University.

“This was an opportunity to benefit from all their experiences in fledgling democracies, and to work with the challenges these universities faced in trying to become viable institutions,” he says.

“What I’ve grown to appreciate over time,” he explains, “is that you can’t be a strong educational institution unless you create the environment and the culture in which the pursuit of truth, good values, morality and integrity are possible.” 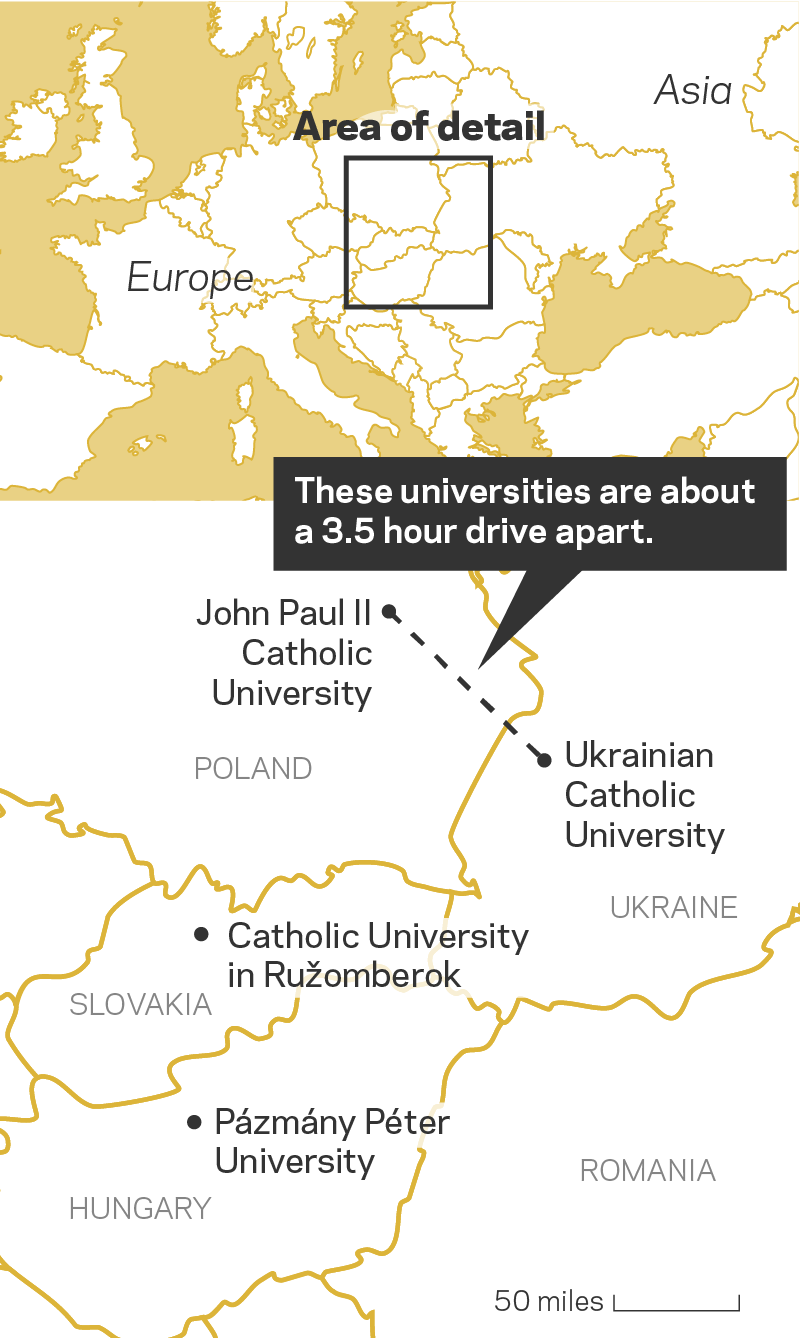 McAdams has spent much of his career living, working, visiting and studying in communist countries, including North Korea and Cuba. He is also the author of a widely respected book on the history of communism, “Vanguard of the Revolution: The Global Idea of the Communist Party.” He arrived at Notre Dame in 1992, and in 2002, became director of the Nanovic Institute. In that role, he began looking for interesting partnerships across Europe, especially Eastern Europe. He was drawn to several Catholic universities, and began knocking on their doors and requesting meetings with their administrators.

The partnership facilitated a connection not only to Notre Dame, but also to one another. Though many of the universities are within driving distance from one another, McAdams notes administrators had never even met, let alone collaborated.

He explains, “There’s a tendency for people to focus within their own countries. It can help when someone comes from the outside and encourages them to talk to their counterparts. Notre Dame has a good excuse for that, because we have a sort of international reputation that makes it easier for us to bring people together.”

To help create those connections, the administrators met at least once annually to pursue themes pertinent to Catholic universities. According to McAdams, at the outset, the group focused on the practical and administrative demands of Catholic universities like student and faculty recruitment, financial planning and course offerings, but today, they can take a wider view and look at their responsibilities in the context of societal challenges. This summer, the annual gathering’s theme was “The Role of the Catholic University in a Time of Populism and Nationalism.”

Partner institutions are also encouraged to send visiting scholars to the Nanovic Institute for a semester or summer stay, a program that has grown wildly popular. Since 2004, more than 100 visitors from CUP institutions have traveled to Notre Dame’s campus to research, teach, write, learn English and receive entrepreneurship training.

Sophia Opatska, the founding dean of the Lviv Business School at the Ukrainian Catholic University (UCU), spent the spring semester of 2017 visiting Notre Dame. She says that this semester was remarkably fruitful. Not only did she find time to refresh, generate new ideas and research, but she also witnessed firsthand how the values her university emphasizes — free speech, free religion, entrepreneurship, transparency — play out in an established and admired school like Notre Dame.

“Principles which we try to use in our work and life are not spread in the country,” she explains.

“We’re experimenting and showing to the rest of society that it can work. You can have this transparency. You can work without corruption. You can trust people.”

She says, “Even after more than 25 years of independence, we still have a lot of those traumas in our heads. Those traumas influence our decisions, how we treat entrepreneurs and business people, how we value initiative in society, how radical the society is.”

Not very long ago there was violence in the Ukraine, Opatska explains. The well-known 2004 Orange Revolution was a rebellion against corrupt elections, but even more recently was the 2014 Revolution of Dignity. At that time, she says, protestors rallied to oppose a controversial decision by former Ukrainian President Viktor Yanukovych to reject an association agreement with the European Union. Fearing this would eliminate chances for successful business ties and transparent government, tens of thousands of protesters, including students and faculty from UCU, marched against the government decision. What began as a peaceful demonstration quickly turned violent when the police turned their guns on the protestors, resulting in 82 people dead and 1,100 injured. In response and in support of partners at UCU, Rev. John I. Jenkins, C.S.C., president of Notre Dame, issued a statement supporting their right to free speech and peaceful protest.

But McAdams notes the relationship is not one-way. Notre Dame has gained just as much from the CUP collaborations as it contributes, he says.

“It’s enriching and fulfilling for people from Notre Dame to see what it means to run a Catholic institution, a Catholic higher educational institution, in circumstances that are much less favorable than our own,” he says. “The people we’ve come to know over the past decade and a half are truly impressive, frequently courageous individuals who have sacrificed enormous things, who have sacrificed in many different ways, to lead and teach at the kinds of institutions they’re at.”

The partnership has also made provisions for Notre Dame undergraduates to spend the summer teaching English at the Ukrainian Catholic University and experience the school and culture firsthand.

Elly Bleier, a junior studying Russian and political science, spent the summer of 2017 at UCU where she instructed 10 university students. For Bleier, the opportunity was more than just a trip abroad. It was a journey back to the country where she was born. 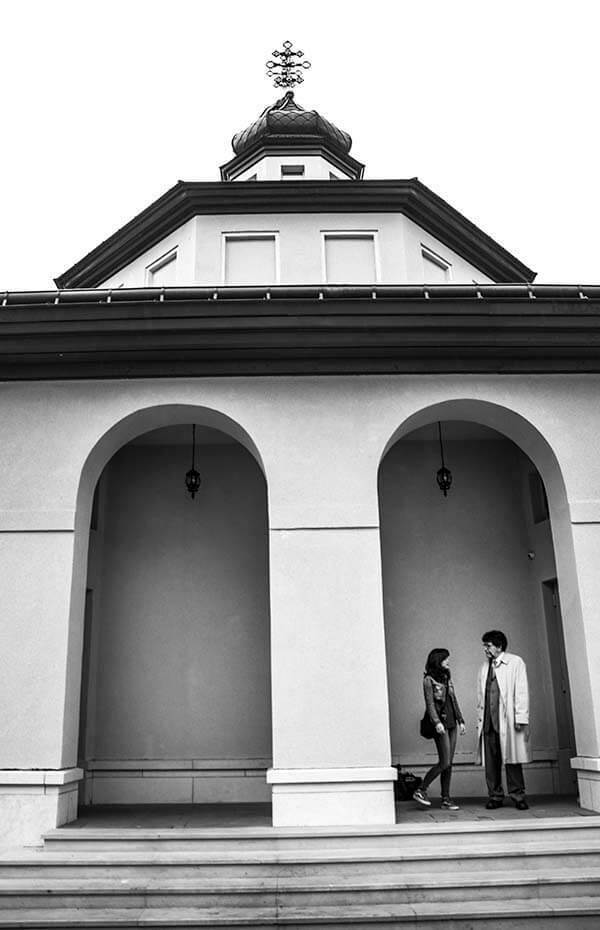 When Bleier was 2 years old, she was abandoned at a Ukrainian train station by her biological parents. She was brought to a local orphanage where she and her sister were adopted by Rocky Bleier ’68. She had never returned to Ukraine until McAdams offered the opportunity to teach there. Eager for the chance to experience her culture firsthand, she applied to the program. Once there, Bleier was responsible for lesson planning and instructing for several weeks, but she thinks the most valuable lessons were the exchanges between the students and her.

“The most valuable result for me, and perhaps for them, was the cultural exchange that happened between us,” she says. “More of it was just us getting to know each other as people on a personal level, cutting through any surface stuff or cultural barriers that would have been there otherwise.”

She says she came away with a better sense of the place, the people and the culture of her hometown, and a deep appreciation for what UCU is doing.

“The students at UCU, the program at UCU and the whole mission of the university itself proved to me that working to help other people in creating a community, even isolated and small and hard-won, that does the right thing is always possible, no matter how bleak the outlook and how bleak the place in which the community exists,” she says.

“I do want to go back and keep helping. I feel like I have a responsibility to do that because I was given so much through my adoption,” she says.

Bleier recently completed a summer language immersion program in Russia and plans to study abroad there in the spring so she can continue to learn about and experience that part of the world.

The Catholic Universities Partnership is now more than a decade old and resides in the new Keough School of Global Affairs. Its success has McAdams looking at both its history and its future.

“All I ever wanted was to create something that would help to make Notre Dame truly international,” he says. “Ultimately I would like to see Notre Dame use this partnership as a way of getting deeper into Europe.”

He lists a number of future possibilities including language offerings at Notre Dame taught by CUP institution faculty, lectures and conferences by Notre Dame faculty at CUP institutions, or a study abroad program with the John Paul II Catholic University of Lublin, Poland.

He emphasizes that this particular partnership is an ideal embodiment of Notre Dame’s goal to be truly international. It ensures people go beyond visiting and sightseeing, and instead invest in cultures and people very unlike themselves.

“You understand what it means to be a global actor, an international actor,” he says. “You don’t just travel abroad and see things, but you share people’s experiences. You get a better perspective on how they live and work, and on yourself.”