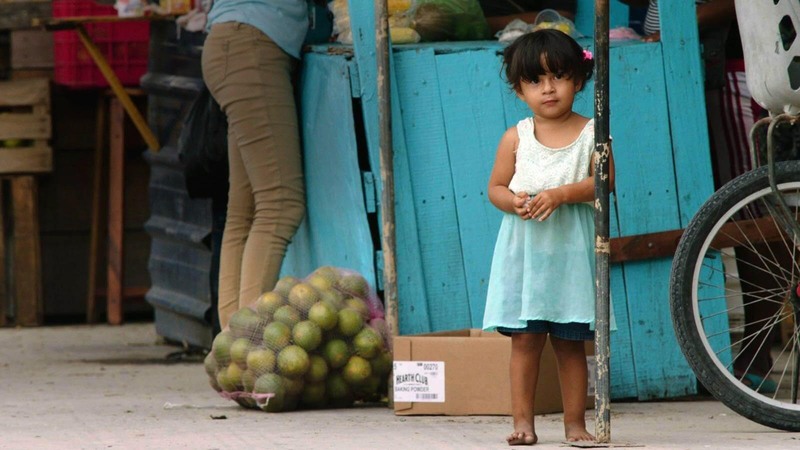 Leading up to the 2016 summer Olympics in Brazil, Zika virus ravaged South America, and photos and videos of patients haunted the news worldwide. A year later, Zika has fallen out of conversation in the United States, but not so for the rest of the world.

“In general, cases of Zika have definitely decreased in most of Central and South America, but the virus is not gone. The mosquitoes carrying Zika and other diseases are still there, and the risk for another infection outbreak is still quite prevalent,” says Elitza Theel, director of the Infectious Diseases Serology Laboratory and co-director of the Vector-Borne Diseases Service Line at Mayo Clinic.

Though Zika virus was identified in 1947, the World Health Organization (WHO) says it was largely localized for 60 years. In 2007, the first recognized outbreak of Zika affected 5,000 people on Yap Island in the Federated States of Micronesia. From there, it moved to French Polynesia and then in 2015 to Brazil, where an outbreak quickly devastated South America. 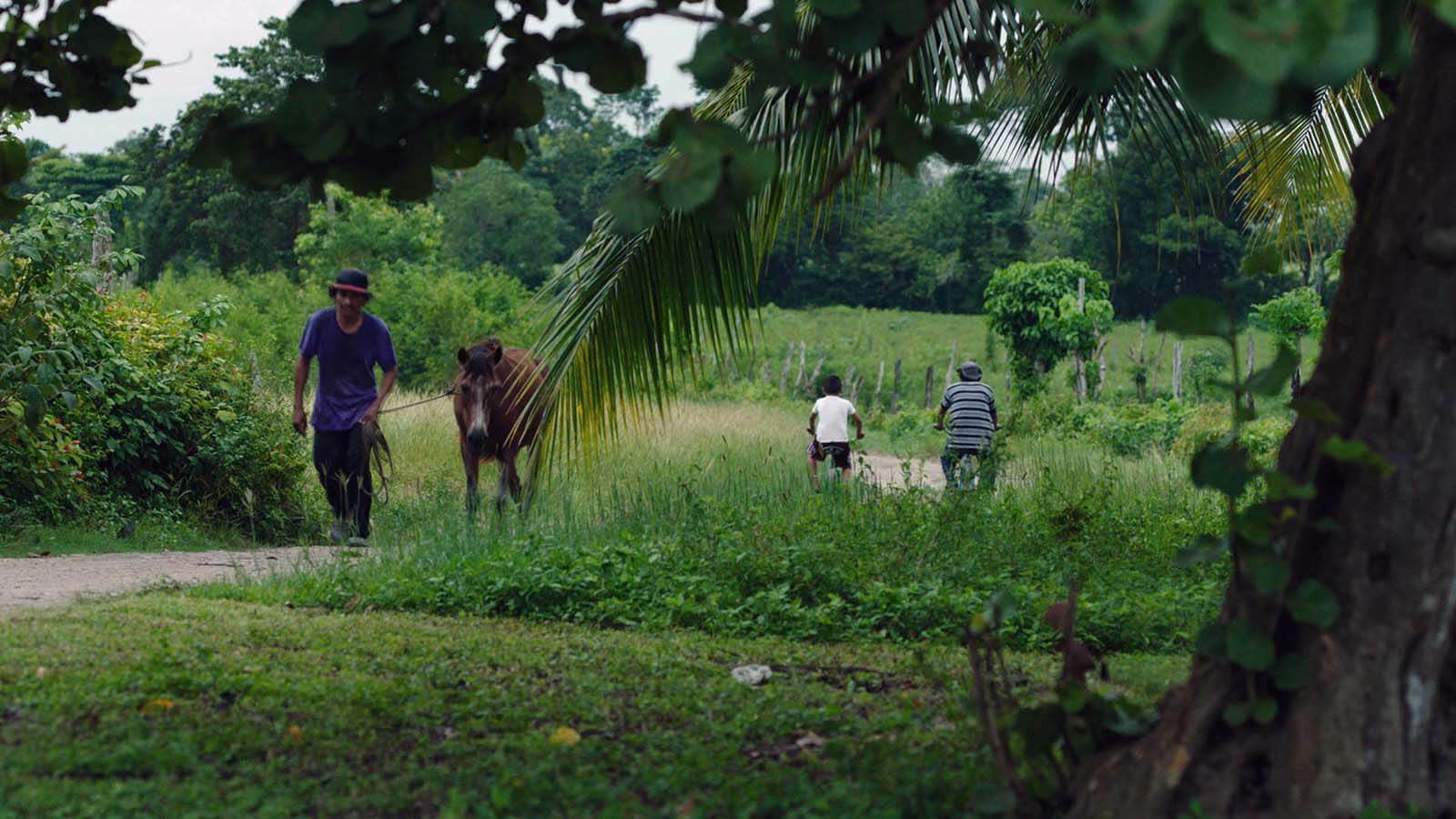 According to WHO, “Once established in Brazil, Zika spread explosively within the country and then throughout Latin America and the Caribbean. Within a year, the virus had been detected in nearly every country or territory infested with Aedes aegypti, the principal mosquito species that transmits Zika, dengue, and chikungunya. Two factors favoured explosive spread: the lack of population immunity and the behaviour of the mosquito.”

That mosquito has been studied at the University of Notre Dame since 1957 when George B. Craig Jr. pioneered mosquito genetics with his work on Aedes aegypti. Since then, Notre Dame has become a global leader in the study of Aedes aegypti and other insect carriers of infectious disease. 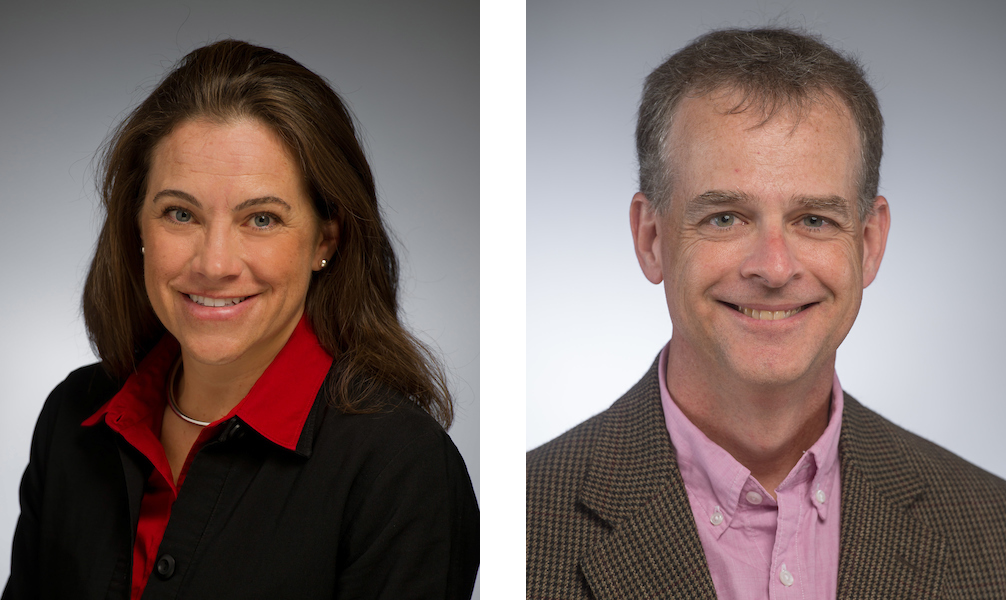 At Notre Dame’s Eck Institute for Global Health, researchers Nicole Achee and John Grieco study Aedes aegypti and its role in mosquito-borne diseases. Over the past 20 years, the biology professors’ work has taken them around the globe to Indonesia, Peru, Suriname, Thailand, Uganda and Belize and has advanced understanding of how mosquitoes and other insects spread infectious diseases and led to better strategies to curtail disease outbreaks.

Once Zika was identified in Belize, officials at the Ministry of Health contacted Achee and Grieco for assistance in tracking and slowing the outbreak. Grieco explains that part of the problem with diseases like Zika is that the symptoms are often non-specific including headache, fever and rash. Aedes mosquitoes transmit Zika virus and other related viruses from an infected person to an uninfected one through a bite, and Aedes aegypti can bite several people and quickly spread Zika through a community. Although no antiviral treatment for Zika currently is available, if cases of Zika are diagnosed early, patients and families can be appropriately counseled and the areas of contraction can be quickly treated to reduce the disease-carrying mosquito populations and prevent subsequent disease outbreaks.

Achee and Grieco agreed to study how and where patients were becoming infected based on local mosquito populations in Belize. Then they formed a collaboration with representatives from Mayo Clinic, led by Notre Dame alumnus John Wilson, an infectious disease physician, and Theel, to direct the diagnostic and clinical efforts.

“We’ve had a long history of research in Belize around vector-borne diseases including dengue, Zika and malaria,” says Grieco. “But the initiative with Mayo has allowed us to expand and include both the human side as well as the vector side of the story, which has been really complementary.”

Earlier this year, the two institutions, along with the Belize Ministry of Health, announced a five-year collaboration to better understand and respond to Zika virus and other arboviral infections. The approach is four tiered and draws on expertise from both Notre Dame and Mayo Clinic.

“We thought it would be a terrific opportunity to bridge the knowledge and skill sets Mayo Clinic has to offer from a health delivery and health education standpoint with the wonderful work going on at Notre Dame in medical entomology, mosquito-borne disease transmission and vector population control,” says Wilson.

The first tier aims to improve medical diagnostic capacities in Belize so technicians can more efficiently and accurately diagnose Zika and other mosquito-borne diseases. A priority is for patient specimens to be tested for Zika and other local infectious diseases in Belize, rather than shipping all blood samples out of the country to referral laboratories and waiting up to two months for results, says Theel. Additionally, the Mayo Clinic team is working with Belizean microbiologists to develop quality assurance metrics and to ensure accurate in-country results. The team has also held training sessions for Belizean technicians both in-country and in Rochester, Minnesota.

The second tier focuses on human population surveillance to help understand which illnesses are circulating in Belize and in which districts. The types and frequency of vector-borne infections encountered in northern Belize are not necessarily the same as those seen in the south, Wilson explains. 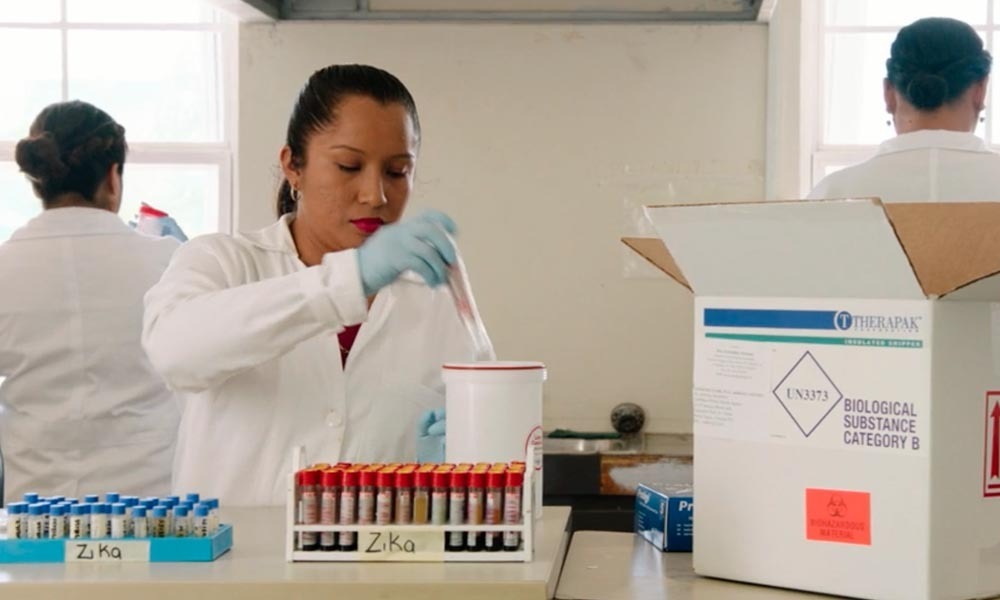 Theel’s lab is accepting patient blood samples from both healthy Belize donors and symptomatic patients to test for antibodies to 15 different viruses and infections. In the 700 samples they’ve tested thus far, they’ve noticed an unexpected and reoccurring presence of Rickettsia species, a bacteria transmitted by ticks. Though the symptoms resemble Zika and can be life-threatening, it’s a curable infection if properly diagnosed. Clinicians can use the surveillance information to better guide their diagnoses and treatment plans, and laboratories can also use this data to determine which tests can be done in-country versus sent out, says Theel. 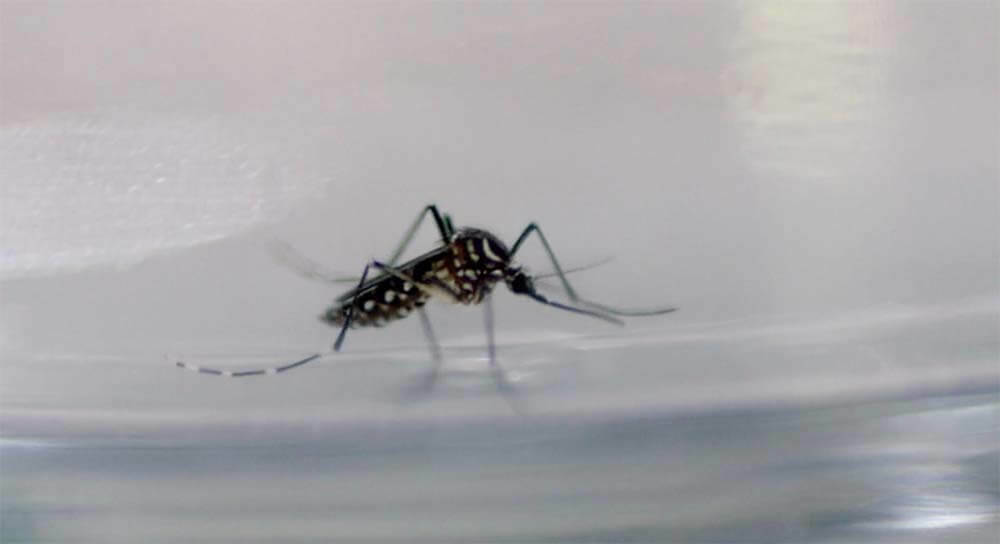 Notre Dame leads the third tier of the project, which focuses on insect vector surveillance. Achee, Grieco and a team of Notre Dame students, Belize Ministry of Health Vector Control officials and local students are performing a countrywide effort to trace Aedes aegypti and other carriers. The researchers are capturing adult mosquitoes and their eggs in various communities to study them in their lab at the Belize Vector and Ecology Center. There they will identify the type of vector; test to see if the vector is carrying dengue, Zika or similar diseases; and use the results to map problematic mosquito pools and confirmed arbovirus cases, says Grieco.

By having a team on the ground, they can identify risk factors for disease transmission, like dense vegetation, inadequate house screenings and water holding containers which can serve as mosquito breeding sites. Meanwhile, the mapped results suggest areas where spray treatments may be necessary for protecting entire communities from these mosquito-borne illnesses.

The team can also use those mapped results and compare them with the clinical surveys to see where there are intersections and outbreaks, says Wilson. “By doing this overlapping human and vector geo-mapping, we can really understand where in Belize are hotspots for certain types of infections,” he says. “That’s what aids providers in knowing what is most appropriate to test for and who to consider preemptive therapy on.”

Finally, the fourth tier revolves around education. Mayo Clinic and Notre Dame are collaborating with the Belize Ministry of Health to create education programs for the public, including radio or television spots, social media, health fairs and town hall meetings. They will also create tablet training that will feature local voices explaining health and transmission information about Zika and the results from their surveillance testing, which can then be delivered by village nurses to patients and communities.

“There’s a face with these diseases. We want to contribute our knowledge to help those we interact with.”
— Nicole Achee

“This will put Belize on the front line of determining what’s going on in its country,” says Grieco. More importantly, he says, it will help the people he and Achee have come to know over the past 20 years. “That’s what drives this: trying to make sure what we do is making a health impact in those communities where we have friends and a kind of extended family.

Achee says, “Even though this is a profession, there’s a dedication and a sense of obligation because of the knowledge that we’ve been provided and we’ve been trained to master. There’s a face with these diseases,” she says. “We want to contribute our knowledge to help those we interact with.”

Year one of the partnership is nearly complete. Thus far, productivity has been remarkable, says Wilson, thanks in large part to Achee and Grieco’s long-standing relationship with the Ministry of Health. The ministry began the project and, as a co-owner, it has collaborated on every tier — from improving its diagnostic testing to harvesting mosquitoes and recruiting nurses to help with education components.

“They’re working with us hand-in-hand on all aspects of the project,” Grieco says.

Kim Bautista, chief of operations for vector control in the Ministry of Health, is optimistic for the future of the collaboration and the future his country. “Our partnership with Notre Dame and Mayo Clinic is making Belize a safer place to visit and a safer place to live.” 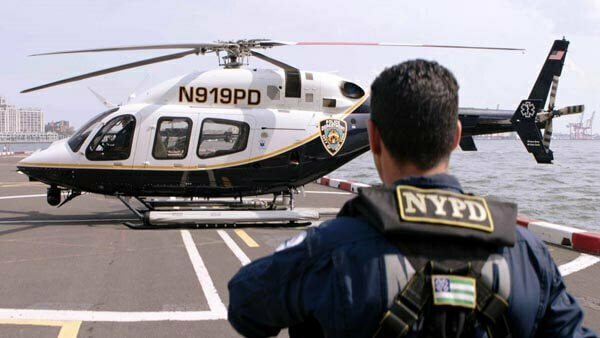 Fighting to Protect Our Country 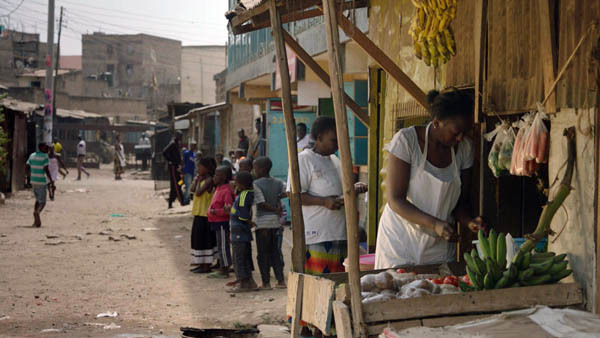 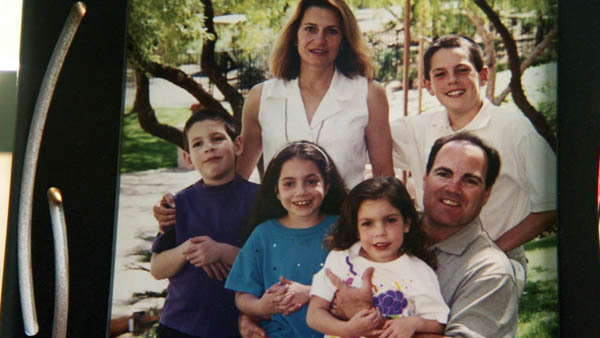 Fighting for the Lives of Children